Proterra to be Publicly Traded; Upstate Investors Provide Support Throughout the Years

Many in our Upstate region know the story of Proterra’s move to Greenville and subsequent loss of funding.  What may not be known is that over the years VentureSouth and the South Carolina Research Authority (SCRA) invested over $5,000,000 to support Proterra’s growth.  It was these two groups coming together that helped keep Proterra alive and its manufacturing in Greenville.

VentureSouth’s investors started propping up Proterra in 2011 through the Upstate Carolina Angel Network (UCAN).  As of today, 95 individual angel investor-members of VentureSouth, plus about 50 angel investors through 2 of the VentureSouth funds, believed in the electric bus company enough to continue investing almost $5,000,000 over the years.  These VentureSouth angels can invest as little as $5000 to support growing companies in the southeast.

SCRA’s role was more than a funding partner.  When the primary investor did not materialize in 2011, Proterra enrolled in SCRA’s SC Launch Program and became a Member Company in 2011. Proterra continued to progress through the program and became investible in 2011 with a $250,000 loan from SC Launch, Inc., SCRA’s investment affiliate.  SC Launch, Inc. also provided an additional $180,000 in 2012 to help fund new equipment. SCRA stepped in and provided the funding and support Proterra needed to grow to its next phase of success and is considered an early investor on which Proterra’s success is built. Today, Proterra remains an SC Launch, Inc. Portfolio Company. 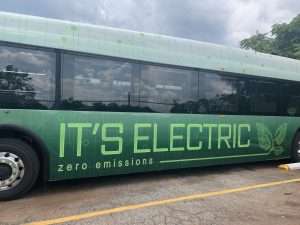 Proterra’s move to become publicly listed provides a financial return on the risk all those investors took in 2011 and over the years.  When local investors support local companies, as those businesses grow and realize a return, the proceeds flow back into our Upstate and provide even more investment funds for growing companies.  This is an all-around win for our entrepreneurs.

While most of Proterra’s electric buses have been deployed in California and other parts of the country, there are already several on the road here in the Upstate. In 2015, the town of Seneca became the world’s first all-electric bus fleet when they purchased six Proterra buses. The City of Greenville added four Proterra buses to their fleet in 2019.

In 2020, because of the generosity of local funders such as Michelin and Hollingsworth Funds, Greenlink received funds from the Federal Transit Administration to purchase 6 additional Proterra battery electric buses. When these buses arrive Greenlink will have a total of 10 Proterra buses, giving citizens all over Greenville cleaner air, additional transportation options and the smooth, quiet ride of a Proterra bus.

Proterra’s journey reflects our region’s growing understanding of the importance of supporting high-impact companies and other entrepreneurial ventures. It exemplifies what can be accomplished by collective investment and shared risk.

An Upstate Thank You to all of the UCAN, VentureSouth and SCRA investors.