By Dewey Evans, Program Manager, Ten at the Top

Baseball is back in Easley, SC (Pickens County) as the Senior League World Series (SLBWS) returns, beginning July 28th and concluding with the championship game on August 4th. A baseball tournament modeled after the World Series in Major League Baseball, youth 13 to 16 years old compete with other U.S. and international teams. Since its inception in 1961, the SLBWS has been played at eight different sites:

Although the popular baseball series moved from Bangor, Maine to Easley just last year, the city is no stranger to the big stage. From 2001 to 2016, Easley was the destination of the Big League World Series (BLWS), which was discontinued following the conclusion of the 2016 tournament. A team from South Carolina won the BLWS title as recently as 2013.

The Senior League World Series, much like the BLWS, is a mix of U.S. and international teams. Each team is placed in one of the two 6-team modified-double-elimination brackets based on geography (US and International):

The SLBWS invites 12 teams, differing from its predecessor, which hosted 11. Click the image below to view this year’s bracket. 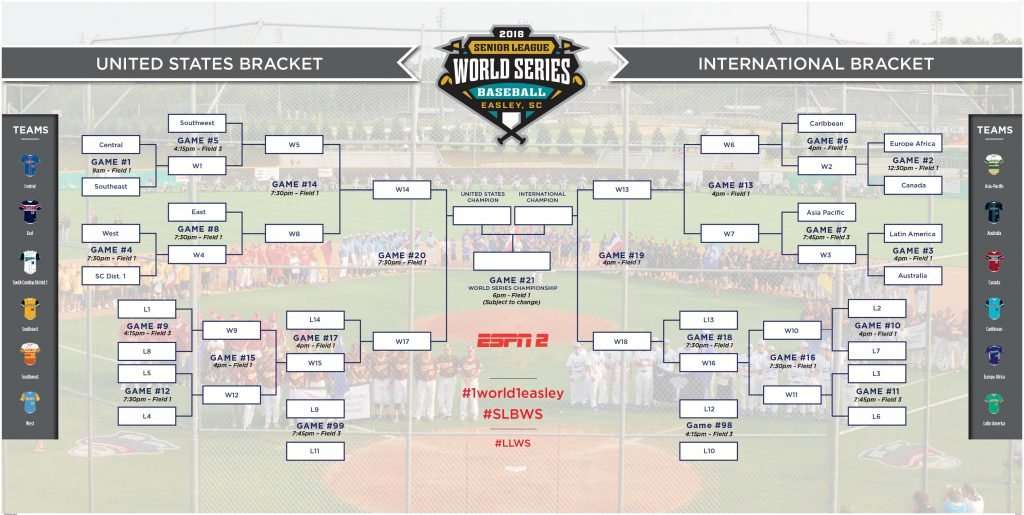 Doing much more than simply providing residents of Easley and the Upstate a look at the baseball stars of the future, the SLBWS produces a considerable economic impact for Easley and the state of South Carolina. Read below an analysis done in 2015 by Greenville News writer Ron Barnett on the economic impact of what was then the Big League World Series:

“An economic impact study done by Clemson University researchers showed that the tournament generates direct spending of more than $670,000, … Furthermore, using a formula that includes indirect and induced effects, the researchers said the games created at least 12 jobs, local government revenue of $37,081, and state government revenue of $119,933, bringing the grand total of economic impact to $737,472, Barnett reported.” (Greenville News, 2015)

Furthermore, the tournament shines the national sports spotlight on Easley, with the championship game featured annually on ESPN. In 2016, State House Representative Neal Collins (SC District 5), remarked that “You can’t put a price on what it means for the city of Easley, being promoted on ESPN,” he said. “Even more important than that is what it’s building for the young men. We now have 16 years of teams who have been able to experience what it means to be in a tournament like that.”

The 2018 SLBWS, as years past, will be held at the J.B. “Red” Owens Sports Complex. There will be a Fan Fest held on July 27th in downtown Easley beginning at 6:30 p.m. The Fan Fest will include team introductions, family fun, and entertainment featuring Jack N’ Diane’s Dueling Pianos.