Quick—who was awarded the 1964 Nobel Prize in physics? If you came up with Greenville native and Furman graduate Charles Townes (extra points if you also 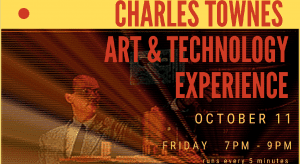 came up with Nikolay Basov and Alexander Prokhorov, who received the award with him), then you’re going to love the Charles Townes Art and Technology Experience this Friday night in Travelers Rest. And if you didn’t come up with his name, you should definitely go see (and experience) the interactive art installation that uses light and sound to inspire curiosity and experimentation in viewers of all ages.

Created by multimedia artists Jeff Sumerel and Goda Rupeikaitė-Sumerel, the project was funded in part by a Hughes Investments Elevate Upstate grant, awarded last year at Ten at the Top’s Celebrate Successes event. 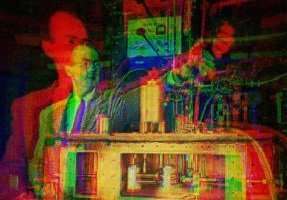 According to a press release about this installation, “Jeff Sumerel and Goda Rupeikaitė-Sumerel create notable, one-of-a-kind stage and film works using traditional and non-traditional methods of production and collaboration to create entertaining, thought-provoking and memorable experiences for diverse audiences.”

Sumeral hopes that the curiosity sparked by this event will turn it into an annual event, bringing others in to create something new each year.

Asked what drew him to Townes, he says he was looking for a well-known Greenville native to celebrate, much like the town of Cheraw, SC has done with native son Dizzie Gillespie. He landed on Townes because “his spirit of curiosity, exploration, and risk-taking resonated not only with those working in science and technology but also those in the arts,” Sumeral says. 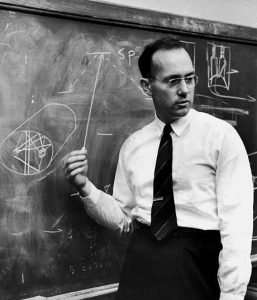 So what exactly is an art and technology experience, and what can visitors expect? It’s not a laser show, nor a grand presentation or in-depth narrative about Townes, Sumeral explains. Rather, he says, it’s “an outdoor abstract multimedia installation that runs every 5 minutes,” with “a minimalistic film projection and audio soundtrack that incorporates quotes from Townes.”

Just bring your curiosity to the football field at Gateway Park in Travelers Rest on Friday, October 11th, between 7:00 and 9:00 p.m., to experience it for yourself! And if you find yourself wanting to know more about Townes, you can read about him here.